Comic Strip Fable of the Manpig 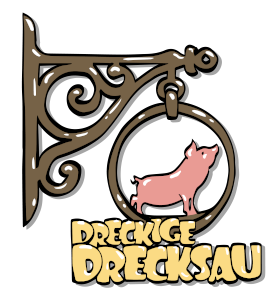 I just want to do a comic strip here about the mess of sweat.

The space,
infinitely large and empty,
as if he wasn't there

The pig ...
In billions of years, a species was formed on a tiny sphere even smaller than the sphere. The bullet moved through a huge black nothing, but the tiny pigs didn't notice it, because they were so tiny that billions of them found space on this already infinitely small sphere.
They thought they were chosen by someone they called God. God had created the giant black nothing. When you consider that it was just an infinite nothing, it took this god quite a long time, five days. You don't know if this god was employed by a boss. Probably not, because he would have received termination without notice for doing nothing.
Other pigs didn't believe in this god. They simply believed in nothing, which it was, and called it nirvana.
Actually, they were all genetically the same, but for some reason, some thought they were better than others, so they established boundaries, called states. These states hit each other's heads. And they did so for the most absurd reasons, e.g. B. because some thought their creator was on their side, others too. Often they just wanted to have more paper that everyone attached great value to ...

Leader of the World